Despite living on opposite sides of the USA, Richard and Anne decided to connect on Stitch. Three years on, they’re now blissfully living together in New York. Enjoy their story below, written from each of their perspectives.

What happens when you meet an interesting person on Stitch who lives 3,000 miles away? In our case, we courted online, by telephone, and occasionally in person for about 14 months. Then I moved from California’s Bay Area to the NYC metropolitan area to join Richard’s household. That was almost two years ago.

To back up a little, I had been on Stitch for a couple years in the Bay Area. I was an active member, even a Community Champion. I was looking for a romantic relationship as well as friends. While I met nice men and went on dates, nothing worked out. I had joined Stitch in its early days in the Bay Area, and I eventually ran out of local men to meet. Stitch started showing me profiles of men in Nevada, Arizona, Illinois as my search crawled across the continent.

While I met nice men and went on dates, nothing worked out.

Though it seemed unrealistic that I’d find a romantic partner at such distances, I still enjoyed reading profiles and exchanging emails with some. By this point I had become a connoisseur of profiles, and when I discovered an interesting person, I liked to reach out and say “Hi – too bad we live far apart”. Stitch even had an automatic message to that effect, complete with a little airplane. With no thought that these long-distance missives would amount to anything, I still sent them, wishing a sincere salute to a fellow searcher. “Don’t give up! You sound cool!” was my intention.

I remember seeing Richard’s profile and I found many things about him quite interesting. His overseas work with the United Nations, his immigration law practice, his obvious love of learning. So, I hit that little auto message button with the airplane and thought that was the end of that.

So, when Richard responded all the way from the east coast with his first email – “Best. Profile. Ever.” – it opened the way for a conversation. First on Stitch, then email, then telephone calls. We began a habit of talking on the phone at 10 am his time, 7 am mine, almost every day. We learned a lot about each other, but we all know how easy it is to fill in the blanks with what we imagine to be another’s best qualities. We were going to have to meet and get to know each other In Real Life.

That weekend made clear that we were on the road to something good and distance would just have to be handled.

It happened that the first Stich Get-Together was scheduled in a few months in Monterey California. I was one of the local organizers and would be there for the weekend. Richard thought that would be a good way to meet and check each other out, and he made plans to be there too. That weekend made clear that we were on the road to something good and distance would just have to be handled.

We began visiting each other every month or so. We even went on a two-week vacation together to Vietnam, Cambodia and Laos. The morning phone calls became as regular as clockwork, lasting at least an hour. Other circumstances nudged me in the direction of moving out there, though I admit I was nervous. So after 14 months of courtship, I made the leap and moved in with Richard (and his daughter and dog – both of whom happily accepted me) in his home on the Hudson River in New York. That was almost two years ago. We are still here, still together, still connected by that impulse we both responded to.

Was this meant to be? Sometimes I think so. During those long morning phone calls where we first learned a lot about each other, we discovered that we were both born in the same hospital in NYC. And we both have ancestors from the same corner of northeastern Pennsylvania. If we pursue the genealogy, I wouldn’t be surprised to learn we could be cousins many times removed.

We both took a gamble on love and the distance that separated us and it paid off.

Of course, a relationship is more than common likes and activities. Richard and I both had to grow into our relationship and resolve the misunderstandings and differences we each brought in. The work—and the payoff—is in the small daily reconciling of the ways we are different from each other. Now we both sit here in our little house and yard, social distancing and isolating because we are in the epicenter of the Covid-19 pandemic. Some days it feels like a honeymoon; some days like an old married couple taking care of each other. And it is sublime.

We both took a gamble on love and the distance that separated us and it paid off. But it wouldn’t have happened without Stitch bringing us together in the first place. Richard and I agree that we would never have found our way to each other if it weren’t for Stitch. We owe a debt of gratitude to Andrew and company for developing the tools for older people to connect and meet. Especially the programmer who designed the automatic message with the little airplane.

Thanks for everything, Stitch!

Finding Anne was extremely hard. If I consider that I started looking for Ms. Right at age 16, it took me 54 years. I could adapt Winston Churchill to sum up my lifelong search for true love: “you can always count on Americans to do the right thing – after they have tried everything else”.

Like many guys of my generation, it took me many years to learn what to look for. I have been a very slow learner where romance is concerned. I grew up with a 1960s set of ideas about attraction and love that made it almost impossible to find the right person with whom to have a true melding of hearts. An astonishingly exciting life, yes, but not a true melding of hearts.

Like many guys of my generation, it took me many years to learn what to look for.

Nevertheless, I learned to be a good man and really committed to be a good partner. I had no intention of divorce and tried my very best to make a bad marriage work. But I ended up divorced ten years ago and started dating. It took me quite a while to figure out that I was not a “practical” catch for the pragmatic mature woman.

Having grown up overseas as an expatriate, and pursued a lengthy international career means that there are big gaps in my understanding and experience of America. I do not really fit in.

Worse, I have been working for months at a time in war zones during the past decade, while spending the rest of the time living as Mister Mom, raising my late-life teenage daughter in a leafy NY suburb.

I was smart enough to limit myself to dating women close to my own age, but it took me several years to figure out that most mature women really don’t want a relationship that involves step-parenting a teenage girl!

And coming back to dating after many years was a shock for me. My expectations, based on the experiences of my younger self, were that I would find the right person and we would adapt and meld together. The absence of suppleness of body was expected – we are older, after all, but I was not at all prepared for how rigid we had all become over the years. “Set in our ways” is the phrase.

And the dating sites encourage masks and artifice – quite the opposite of what I really needed. After a few years of trial and mostly error, I stumbled upon Stitch – its model looked far more humane than other sites and it seemed to offer more than the depressing parade of rejections or mismatches I was used to – it offered social fun. Why not try? So, I did.

Dating sites encourage masks and artifice – quite the opposite of what I really needed.

And I liked it. I was just starting to get active locally when I saw Anne’s profile: Best. Profile. Ever. Real, witty, literate, fun – a person I could truly enjoy being with. So, I brushed past the obvious barrier of her being in the Bay Area while I’m in the Hudson Valley, and I wrote her.

We struck up a conversation that has never ceased. We began talking and quickly began spending an hour on the phone each day. We talked of who we were, what we thought and dreamed, and how we wanted to live. With each conversation I felt more heard and understood. And I wanted to hear more about her.

Having a conversation without the need for barriers or limitations was exhilarating. It was the next best thing to a long, close, quiet hug.

Three months later, it was clearly time to meet, and I took the opportunity of the first Stitch convention in Monterey to fly out to the west coast to check out this fascinating person. I was pragmatic – I thought that in a crowd of fellow members, we could drift apart if there was no chemistry. But there was.

Having a conversation without the need for barriers or limitations was exhilarating. It was the next best thing to a long, close, quiet hug.

This is not to say that the person I met was someone I’d have been drawn to instantly had we met by chance in person first. I would not have known the inner person from Anne’s externals. But Stitch had given me a pair of ways to connect on a much deeper and more valid basis – I found a perfectly crafted profile that resonated with me, and I got a clear view of the inner person before I even met Anne.

In the nearly three years since I met Anne face to face, what I see when I look at her bears no resemblance to what I first saw. I find myself ever more attracted to her as a woman, the more I love her.

And love her I do. She has described our long adjustments to each other. She has not described the tacit shift that took place once we began spending time and then living together.

Yes, we still talk a lot, but every morning and evening we quietly hug, for a long, long time. We know each other well enough now to be silent and simply love. 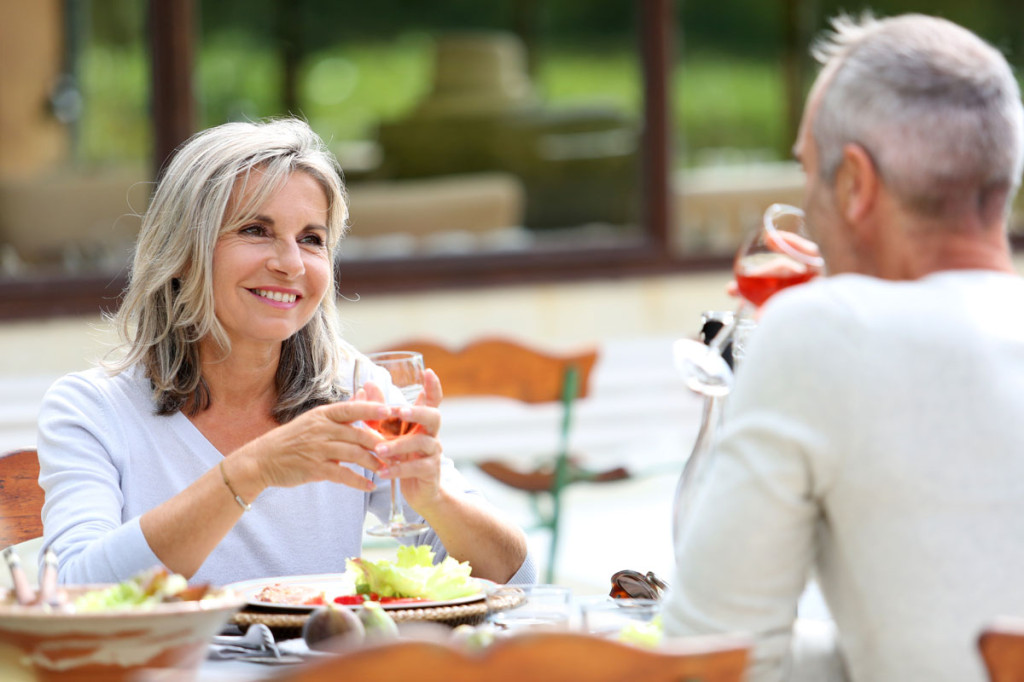